Archive for the tag “history”

Bark Cloth of the Cook Islands

Decorating the finished tapa was done with freehand painting, immersion in dye baths, or it was cut with designs in a patterned motif. The rubbing method using design tablets was not used in the Cook Islands. Diamond motifs, which were “associated with the sacred world of the gods,” were applied on masks using the freehand painting method. Masks were made and decorated in Mangaia and Rarotonga and they were used in pageants called eva, to remember gods and cultural heroes. These ceremonies also were performed in association with mourning.

Tiputa was worn as clothing in the Cook Islands, in the Tahitian style that is believed to have been the result of the strong missionary influence. The tiputa was fashioned as a long piece of tapa that had a hole cut into the middle to be worn on the body like a poncho. Pants were made too. Articles of clothing were cut at the edges in fringes and cuts were made throughout the article in repetitive patterns, as in Futuna.

In the Cook Islands, as elsewhere in Polynesia, making bark cloth was done by women. However, a special, heavier, white cloth called tikoru was made by men. This was a special ceremonial bark cloth that was used to wrap around god images and was the attire of priests and high chiefs. This use may reflect the connection to spiritual beliefs that the chief and priests are descendant from the gods themselves.

Hawaiian Word of the Day: hānai

akua hānai: 1. Spirits, as of a recently dead kinsman, who were fed (hānai) offerings (such as food) and sent out to destroy an enemy. 2. The kauila, nioi, and the ʻohe “poison” woods of Molokaʻi, which were kept by sorcerers in their houses, wrapped in tapa, and to which food offerings were made daily; scraps of these woods were used as poison, and poison itself was sometimes called akua hānai.

hānaiāhuhu: To make a pet of an animal; to care for well, as a pet; cherished plans, pet projects. Eia kekahi mau hānaiāhuhu a ke aupuni, here are some favorite plans of the government.

hanaina: Feeding. Eia mai ka moa i hanaina lā, here is the rooster fed in the sun; the cock fed in the sun was believed strong because of turning his head to avoid heat. 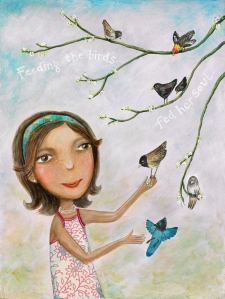 Feeding the Birds, by Joanna Dover

Tapa Designs from the Kupesi of Tonga

Kupesi design tablets in Tonga are constructed by sewing coconut midribs onto a pandanus or coconut leaf sheath. This style of kupesi, which is still used today, is believed to have spread from Tonga to Fiji and Samoa, and beyond to other islands (tongabarkcloth.com).

The designs on Tongan ngatu are known for commemorating historical events in their motifs. Such memorable things in the life of Tongans as the introduction of bicycles, electric poles, and other historical events have been recorded in ngatu designs to document these occasions. Abstract and natural motifs are used. Ngatu ʻuli is black and used only for funerals, whereas ngatu tahina was lighter and used commonly.

Although ngatu is not worn as clothing anymore it is still highly valued. It continues to be a very important traditional koloa (treasure of women) and given as a gift item at ceremonies such as births, weddings, and funerals. It is given in amounts that make a statement about rank and social standing. This is an important facet of Tongan culture and has been recognized by scholars as part of the Tongan cultural system of gift exchange in a ceremonial economy. 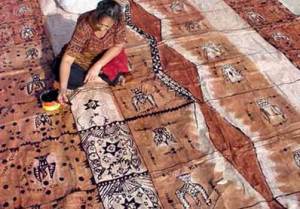 Tapa in Tahiti ~ A Close Cousin to Hawaiian Kapa

ʻAhu is what Tahitians a Society Islanders call bark cloth and clothing. The inner bark of the breadfruit, hibiscus, and ficus were used as well as the paper mulberry tree, called aute. Large amounts of aute were cultivated for the ariʻi noble class. Commoners had to use the stiffer breadfruit variety. The inner bark of these various trees were beaten in the same manner, with the wooden club, tupai on the beating anvil, tutua. The fibers were beaten until the fibers became stretched and interwoven using the felting technique of layering.

Large amounts of ʻahu was owned by nobles as a sign of their rank and prestige. It hung on house posts; it was stacked up somewhere in the home to be brought out to visitors in a sign of wealth and pride. Bundles of white ʻahu were hung above the house, pieces up to 590 feet in length were suspended from the roof in chief’s houses! Bundles were also kept in the houses as dedications to the gods, with the god images (Pacific Tapa, 1997).

ʻAhu had many uses and importance here as in the rest of Polynesia. It was used for clothing, funerary wrapping, and bedding. ʻAhu functioned as a gift in marriage, for declarations of peace, and burial objects (Life in the Pacific of the 1700s, 2006).

Layers of soft ʻahu were used for the clothes of ariʻi class nobles and chiefs. Common people wore ʻahu made of bark from breadfruit trees (Artocarpus altilis). Women’s clothing was a skirt called a pareu. Men wore a loincloth called a maro. An ahufara was worn by women as a shawl around the shoulders. The tiputa poncho was worn by all people. There was a different tiputa worn in different types of weather. It could be made of several layers of thick ʻahu from the bark of the Hibiscus tiliaceus. Or a single layer tiputa was worn in dry weather. Multi layered tiputa was worn at night or in cooler weather. High ranking people wore tiputa colored with red, yellow, or brown dye with an applique of red feathers. Colored ʻahu was reserved for people of rank, and only the very highest ranking nobles were permitted to wear red or yellow colored ʻahu (Life in the Pacific of the 1700s, 2006).

Production of dye was women’s work. Brown dye was obtained from the bark of the tiari or tutui trees (Aleurites trilobia). The bark was scraped or pounded and steeped until the strength of the color was achieved. The Aleurites bark has gummy substances and so strengthened the ʻahu cloth and made it more durable. The juice of the Nono shrub (Morinda citrifolia) and tumeric provided yellow dye. ʻAhu was dyed in immersion dye baths or left plain white (Life in the Pacific of 1700s, 2006; Pacific Tapa, 1997).

Fine lines in a single-layered ʻahu were imprinted using a bark cloth beater, called a tupai. In the society Islands red patterns would be made with bamboo stamps dipped in dye and applied. Figures were also drawn freehand (Life in the Pacific of 1700s, 2006). Brushes were used to draw freehand and were made from a grass known as mo’u.

Tahitian decorative motifs since contact with Westerners are recorded to be leaves and fern fronds dipped in dye and pressed to cloth in a pattern. Sometimes pieces of one color were pasted on the surface of another to create an interesting effect.

The art of beating the ʻAhu is not widely practiced today and was almost extinct. Since a revival of traditional skills and knowledge, interest in this cultural art form is stirring (Pacific Tapa, 1997). 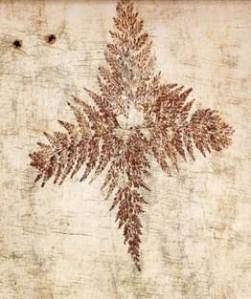 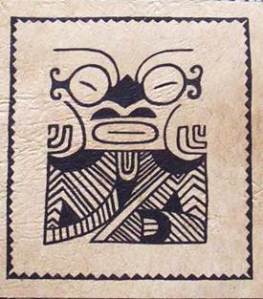 Hawaiian Word of the Day: kaona

kaona: Hidden meaning, as in Hawaiian poetry; concealed reference, as to a person, thing, or place; words with double meanings that might bring good or bad fortune. Kaona ho’oʻinoʻino, pejorative innuendo. No wai ke kaona o kēlā mele? Who is being referred to in veiled language in that song?

Kapa that I made over the past weeks…

This photo shows 14 pieces of kapa in a variety of sizes and textures. Some are heavy and stiff, some are thin, fine, and flexible. Many hours were spent pounding these using the hohoa and iʻe kuku to form a smooth cloth from the raw wauke tree bark, paper mulberry tree. These pieces are now ready for ho’owehi, decoration. The ʻohe kāpala are literally bamboo stamps, carved to be printing tools. I have gathered raw materials to make hoʻowaiulu, dyes. I have ʻōlena root for yellow, kukui nut ashes for black, and ʻalaea a mineral in the soil for red. I also have boiled down banana flower petals and got a brown wash. Stay tuned for the results! ~Aloha~ 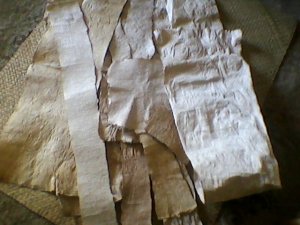 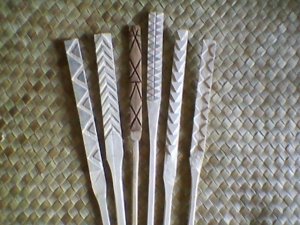 Hawaiian Word of the Day: lau

lau: 1. Leaf, frond, leaflet, greens; to leaf out. Lau is sometimes contracted to lā-, as lā’ī, lāʻie, lāʻō. ho’olau. to grow leaves; to leaf out. 2. Dragnet, seine, so called because formerly made of ti leaves (lau) tied to a rope. Hukilau, lauahi, lauʻapoʻapo, laukō. ho’olau. (a) To use a lau. (b) A bundle of grass or ferns set in water to attract shrimps or ʻoʻopu fish; a net was placed under this bundle, and the fish shaken into it. (Proto-Polynesian rau.) 3. Sheet; surface; blade, as of grass. 4. To be much, many; very many, numerous; four-hundred. Lau ā lau nā hōkū o ka lani, hundreds and hundreds of stars in the heaven. Lau lena ka pua o ka māmane, the māmane is yellow with blossoms. ho’olau. To make numerous; to assemble, as of numerous persons or animals; numerous. 5. Pattern, as for quilts; design; print of a cloth. Pāhoehoe lau, brocaded satin. 6. Thatched mountain hut, as used by farmers, canoe-makers, bird catchers. 7. Tip, as of the tongue; top (probably related to wēlau and ʻēlau, tip). Lau make, death-dealing tip, as of a weapon. Moe…i ka lau o ka lihilhi, to doze; lit., sleep by the tip of the eyelash. 8. Sweet-potato slip or vine. 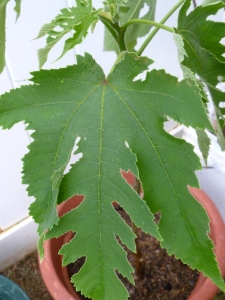 Hawaiian Word of the Day: na’au 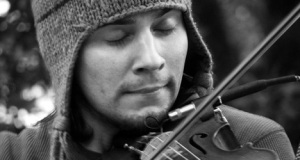 Hawaiian Word of the Day: lawa 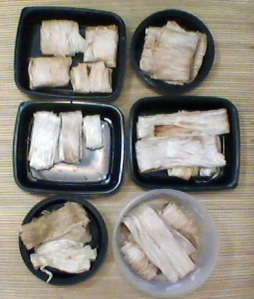 “Beware of the half-truth. You may have gotten hold of the wrong half.” ~Author Unknown

As I was doing research for a timeline on Hawaiian history I came across a fellow by the name of Ken Conklin. At first, I thought I had stumbled upon a well-researched document of unbiased truth. As I continued to read through Mr. Conklin’s references, http://www.angelfire.com/hi2/hawaiiansovereignty/references.html … I was impressed by the wide variety of sources and annotations he listed. But the further down I got in his list, I realized that this man was voicing bigoted sentiment about Hawaiians who believe in a Hawaiian Nation, or Hawaiian Sovereignty in any form. In fact he doesn’t hide his brazen disdain. He ignores the facts of dispossessed Hawaiians… losses in land, culture, and language resulting from historical events.

I bring this up because others might share the views of Mr. Conklin. To these people, I would say, there are two sides to every story. Rationalizing what Conklin calls “the concept that there is no historical, legal, or moral justification for race-based political sovereignty for ethnic Hawaiians” is a clear case of more of the same from hypocrites and thieves… As history has shown, Hawaiians have been of generous spirit and inclusive to the point of our own detriment. Sorry if some people don’t agree with me on this. 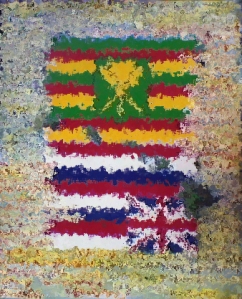